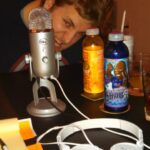 I am honestly surprised John didn’t mention 25 being a milestone episode. I’ve finally beaten him into an apathetic submission. Spoilers though… it isn’t.

We start off by trying the newest in the line of Shaquille O’Neal based beverages and then trail off into video games and movies as usual. Sprinkle in some UFC and some controversy involving North Korea and we’ve got an episode. We also defend Furries in this episode if you can believe that!

I’ve also created Facebook and Twitter pages due to popular demand (mostly John). I plan on mostly using them just to post new episodes, but more can come from them as John will also have full access. God help us all.

Preview picture is our setup this week with all of our beverages… and John. Gross.

And as always, check out the bitblastpodcast. They’re guys… and stuff.