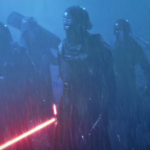 Jake and John Pod
Episode 44 - Nothing But Celestial Battles

If they should bar wars, please let these Star Wars stay!

We talk a lot about Star Wars in this one… as well we should! Episode VII is out in less than two months, so expect a healthy dose of Star Wars with each episode forthcoming. In this one we discuss the trailer, why Luke Skywalker would never turn to the dark side, some comics stuff, etc. SPOILERS ABOUND YOU HAVE BEEN WARNED.

We also talk a good deal about Assassin’s Creed Syndicate. I even impromptu the survival order of the assassins, although I wish to expand upon this further since I’d like to think about it more.

Preview pic is the Knights of Ren. Can’t wait!

And as always, check out bitblastnetwork. Even though life has gotten in the way, they’re not dead!